Elliot Salem (currently known as El Diablo in AOT: TDC) is one of the two main protagonists turned main antagonist of the Army of Two series. He originally worked for the SSC with his long time partner and friend Tyson Rios and later formed with Rios the T.W.O..

Elliot Salem's transition from being a small time teenage "gangsta" to a battle hardened warrior was made easy by the Louisiana State Penal System. Choosing to serve his country rather than his fellow inmates, Elliot joined the US Army Rangers. While you can take Elliot out of the hood, you can't quite take the hood out of Elliot, being a master hustler, panhandler, spendthrift, gambler, and a thief back in his gangbanging days. His shady background shows through as he is quick to accept morally questionable missions with the promise of a big payout, or take risks that other soldiers would consider too dangerous. Fortunately for him, Rios is always there to help steer him right and make him think before he acts.

Salem and Rios may bicker, but there's no denying that on the battlefield, the two make a great team. As Rios devises strategy, Salem executes it. Without fear, regret or remorse, Salem is able to run headlong into battle and rip apart any adversary- often before his foes realize what just hit them.

Never having really grown up, Elliot acts like a child, curses like a sailor, and parties like a rock star. His terrible spending habits paired with his excessively materialistic lifestyle keep him in constant financial trouble - no matter how much money he makes, or what his nagging buddy Rios tells him. Salem stands at 5,11 feet, " taller than most shorter than few", and 187 pounds of gold ranger physique. Elliot is a weight trainer and is built like like one of his favorite action heroes, Arnold Shwarzenagger, lean, muscular, staminized, and physically tough.

On the first mission of Alpha and Bravo, in which they are to save a woman named Fiona, Salem hastily decides to escape, as the hostile force has become aware of their presence and reinforcements are inbound. Rios stays with Fiona and the new operatives, claiming Fiona is innocent. Salem soon finds a pickup truck and begins to drive away when it is hit by an RPG. Alpha and Bravo rush to save him, followed by Rios, who sustains a severe wound to his leg from an explosion from the now burning truck.

More enemies quickly arrive, and the new partners are forced to split up: one protecting Rios, and the other looking for Fiona and calling for an extraction. As she is picked up along with an operative, their teammate and Rios soon board the helicopter, as well. At the end of the mission, Salem is presumed dead.

Five years later, Salem returns as "El Diablo", which translates to "The Devil" in Spanish, a top lieutenant of the Mexican cartel known as "La Guadaña". El Diablo is first discovered to be Salem when Alpha and Bravo are captured along with Mayor Juan Angelo Cordova. He executes Cordova, and leaves the two operatives alive, who soon escape. After escaping their bonds, Bravo claims that he knew El Diablo was Salem, as the mask was a dead giveaway. Salem later found out the two were freed, then geared up after they regrouped with Chuy and Baker. Alpha and Bravo are then ordered by Rios to capture him.

Soon after capturing Fiona, he was confronted by the duo and Rios. Salem murdered Fiona, and nearly killed Rios. However, Alpha and Bravo still pursued him, and eventually got into a fight in a courtyard. Shortly after, his vehicle was destroyed, leading to his capture and imprisonment. There is then a cinematic in which Salem is in his prison cell, engraving "Alice" on the wall, in memory of Alice Murray, a T.W.O. mission coordinator who died in a helicopter crash during the events of The 40th Day. Later, Elliot is seen being freed from his cell by an unknown character. Elliot Salem is later freed by the court and jury after found being lead into a operational military accident, that was investigated caused by Fionas mysterious actions.

Salem: Check that, found a door. Rios and Salem each have their own opinions on things. Salem is a money mad contractor and Rios is a tactical and strong headed man. The two have their differences yet they are still best of friends in the thick of things. Showing that an Army of Two is much better than an army of one.

Salem tends to be much more trigger happy than Rios and as such, Rios tends to be a more level headed influence on his partner. They banter easily and often appeared unphased by what they see, though there are times when Salem expresses extreme dislike for what they do and it is implied that were Rios not with him, that he may end up taking more risks for money or simply because parts of the job anger him. Salem and Rios both have personalities that complement each other. Rios is the calming influence while Salem is the gung ho one of the partnership. As such, they each bring something different to the table in terms of a fight and friendship and it is their differences that make them get along so well.

In mentioned of The Devil's Cartel, Salem tells Rios before killing Fiona that he took a bullet for him since he wanted to save Shanghai (telling the player that in the 40th Day that Rios chose to shoot Salem choice). Since then, Salem does not trust Rios anymore. During the Operation where Rios chose to save Fiona, Salem is angered and leaves to his "death". In returning back, Salem hates Rios and reminds him of taking a bullet for him, having his back, and he chose a girl over him.

Behind the Scenes[edit | edit source] 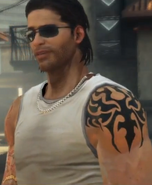 Elliot in Army of Two

Retrieved from "https://armyoftwo.fandom.com/wiki/Elliot_Salem?oldid=8984"
Community content is available under CC-BY-SA unless otherwise noted.