Bravo is the secondary protagonist of Army of Two: The Devil's Cartel and one of the 2 playable characters, the other is his partner Alpha. His name is not revealed, so that the player may "project themselves into the character a bit more."

While Alpha is focused, calm and collective in battle; Bravo is the complete opposite. He's gung-ho, tough as nails and always ready for a fight. But besides that, most of the time Bravo is a funny, wise guy comedian who loves to cracks jokes and make fun (especially of Alpha).

When he got back to the U.S., he took odd jobs here and there, working freelance with various private military companies around the world. T.W.O. headhunted Bravo after a high-profile urban rescue operation. He relies on quick reactions, instincts, and raw talent to keep him alive in battle.

In conversations with Alpha thoughout the game, after he retires he wants to buy a fishing boat and go wienerfishing and Alpha makes jokes about him using dynamite to fish with his (to be owned) fishing boat and jokes such as that.

One may infer that he cares for Fiona, because he is the most angered by her death and carries her body to the extraction helicopter after defeating Salem .

Bravo's "don't mess with me" look 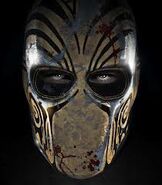 Bravo
Add a photo to this gallery
Retrieved from "https://armyoftwo.fandom.com/wiki/Bravo?oldid=8776"
Community content is available under CC-BY-SA unless otherwise noted.