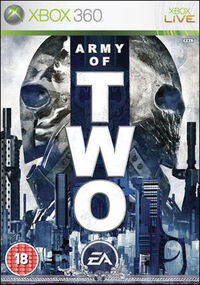 Army of Two is a third person shooter video game developed by Electronic Arts, released on PlayStation 3 and Xbox 360, focusing on two mercenaries fighting through war, political turmoil, and a conspiracy from 1993 to 2009.

Focusing on cooperative strategies, Army of Two's main feature is the necessity to use coordinated teamwork to accomplish the game's goals. While the game is meant to be played with another human as a partner, a "Partner Artificial Intelligence"(PAI) is also included and programmed to follow the player's strategies. Dependence on a partner (whether human or PAI) is so pronounced that most objectives are impossible to complete without it.

The PS3 version of Army of Two is the first game for the console to be region-locked for online play. EA claims that the region-locking is to prevent network lag caused by players from multiple regions, and to prevent the Asian region console owners from playing the US and European version of the game, as the Asian version has been censored to meet certain requirements (notably, the shooting of already dead bodies in the game).[1]

The story begins in 1993 in Somalia when Elliot Salem and Tyson Rios (the protagonists of the game) are in the U.S. 75th Ranger Regiment. They are tasked to work with Philip Clyde, private military contractor with the Security and Strategy Corporation (SSC), tasked with carrying out the assassination of powerful local warlord Abdullahi Mo'Alim. Clyde's overly condescending attitude and behaviour disgust Salem and Rios. Clyde makes Salem and Rios pull off the assassination themselves and clear out the extraction point without his assistance. After this mission, Philip Clyde invites Lieutenant Colonel Richard Dalton (CO for Salem and Rios's Ranger squad) to join the company for a desk job. He agrees, asking to bring Salem and Rios with him as contractors, and in the following year, the three enter the private sector.[2] Salem and Rios begin work as mercenaries.

Salem and Rios are now working for Security and Strategy Corporation. After the 9/11 attack they are sent to Afghanistan to kill an Al-Qaeda terrorist named Mohammed Al-Habiib who seized a missile facility with Soviet M-11 missiles. They also need to blow up these missiles, destroy a chemical weapon stockpile, and find and rescue Brian Hicks, another SSC contractor who failed the same mission. They find and destroy the missiles then find themselves in an area filled with noxious gas. Salem comments on how poorly they are equipped for missions and Rios sees conspiracy in this. They find Brian beaten and poisoned in his cell and carry him to a safe area. They get back into the elevator and fight Mohammed over a missile station. After the fight Rios asks S3kshun8, his hacker contact to unlock a door to the chemical weapon stockpile. They blow it up and finish the mission.

2 years later, Salem and Rios are sent to Iraq. Their objective there is to rescue former squad mate Lt. Col Eisenhower, whose U.S. Army base was under siege by the terrorist leader Ali Youssef. They secure Eisenhower, but before the chopper arrives they are ambushed. Eisenhower bids them farewell before the chopper takes off, but it suddenly explodes in mid-air. Ali Youssef makes a radio transmission claiming responsibility for blowing up the chopper. Rios suspects a conspiracy behind Eisenhower's death, thinking he was singled out – Salem dismisses this, saying he was simply in the wrong place at the wrong time. Just before entering Ali Youssef's oil facility, Rios asks S3kshun8 to investigate the ambushes and try to find their source. Salem and Rios eventually reach Ali Youssef, and kill him at his helipad.

The U.S. Navy aircraft carrier USS Constellation, has been seized by the "Abu-Sayaff" terrorist organization. Returning from an unspecified mission after Iraq, Salem and Rios are redirected by SSC and tasked with liberating the aircraft carrier from terrorist control. They parachute onto the deck and meet up with Philip Clyde. They clear the deck of hostiles and disable the remaining jets to prevent escape. Salem notes that the crew left behind one life boat, which could be useful. Salem and Rios soon stumble upon Clyde and a Terrorist collaborating by a computer. Clyde flees, but Rios retrieves his USB flash drive. He sends the information on the drive to S3kshun8 for analysis, and refuses to tell Alice what's happening until he hears back from him. S3kshun8 tells Rios that Clyde was responsible for leaking U.S. Troop positions to Terrorists. Salem and Rios then stumble upon the Captain. He tells them that there are stolen nuclear warheads on board, the engine room is booby trapped, and they are on a collision course for the city of Manila on the Philippine island of Luzon. Salem and Rios sink the ship and escape using the lifeboat they had discovered earlier.

After the Aircraft Carrier mission, Salem and Rios agree to quit from the company. On a special mission for their arms dealer Cha-Min Soo, they inadvertently make contact with Alice, and decide to pull off one last mission, because Salem needs the money. They are told to execute a head terrorist within "Abu-Sayaff" by detonating a bridge as his car crosses. They complete their objective, but find themselves under attack by the Chinese Military and wanted for murder. It is revealed that the U.S. Senator for Alaska, Richard Whitehorse, campaigning hard against a bill to privatize the military, was the one crossing the bridge. They assume Stockwell set them up, and agree to go public with the evidence they pulled off Clyde. Alice is kidnapped, however, so they head to Miami to save her and confront Stockwell. Cha-Min Soo lends them a large cargo plane and a pilot to take them there.

Miami, Florida is a hurricane zone. U.S. Air Force air defenses pick up the radar trace of Cha-Min Soo's aircraft and send up two F-15's to investigate. The two operatives notice the F-15's and then find that Clyde has murdered their pilot. They engage him in battle, but are interrupted when the U.S. Air Force shoots down the plane (due to the unresponsive dead pilot and sight of gunfire exiting the rear of the plane). Salem and Rios survive, and assume Clyde to be dead. They enter the Miami airport, where they are forced to engage SSC Operatives. S3kshun8 informs them of Alice's location, and they head on to rescue her. In the meantime, Cha-Min Soo radios them, furious that his plane up was destroyed. They tell him it was Clyde's fault, and Cha-Min Soo decides he will pay them to kill him. Rios tries to tell Cha-Min Soo that Clyde already died, but Salem stops him, thinking it will be easy money. Alice reveals to them that it was in fact Dalton who was the mastermind behind the plot, and he plans to kill Stockwell. If he succeeds, the bill to privatize the military will pass, and he will be even more powerful. Alice says they need to save Stockwell, as he is the only one who can clear their names. They make it to SSC HQ, where Cha-Min Soo tells them he hacked their helmet cameras, so he can see Clyde die with his own eyes. Salem and Rios are un-easy, as Soo will obviously discover their lie. They eventually get to the information department of the SSC Head-quarters, and acquire all the evidence necessary to clear their names. Ironically (and lucky for them), Clyde is revealed to have survived the crash. Salem roundhouse kicks Clyde through a window, presumably killing him. They then head to the roof where Dalton is attempting to escape in a helicopter. Rios uses a Stinger missile to destroy the helicopter and kill Dalton.

In the epilogue, Stockwell is revealed (on the news) to have turned himself in and served 3 months in jail. Salem and Rios call Alice and tell her that they have started their own PMC, named Trans World Operations (T.W.O.), and invite her to join them, to which she smiles at.

HOW TO PLAY[edit | edit source]

The game allows weapon customization, bought with money earned as the game progresses. Such elements as new barrels, stocks, forend-mounted vertical grips, and extra-large magazines and ammo drums that can be swapped out to give the weapon a unique look and superior statistics. Other modifications include suppressors, a gun-shield, an under-slung grenade launcher, or an underslung 12-gauge shotgun.

A firing range feature was proposed that would allow the player to test out their newly customized weapon, however it was removed as it did not meet the developers' standards.[3]

The original game boasted three different drivable vehicles: a main battle tank, and a hovercraft. Gameplay was designed so that one player would drive and the other would fire a secondary weapon like a ring-mounted XM312 heavy machinegun (jeep and hovercraft) or a 120mm cannon (the tank). The jeep and tank were removed from the final product due to "pacing issues" and the hovercraft was used only in the China and Miami levels.

(or "Versus" mode) allows up to four players, with two on each team (similar to the co-op structure of the main campaign). Both teams will compete over objectives on the map such as assassinating a VIP or destroying an objective in order to earn the most money for their side. At the same time, they will also be forced to deal with the opposing team in order to secure their objectives.

Multiplayer for the game is currently region-locked. Players with the European, American or Asian version of the game cannot play with each other.[4]

There are 3 multiplayer gametypes: Warzone, Bounties and Extraction.

Also every map contains cases of intelligence documents that the player can seek out for extra cash.

Character customization is not possible in the multiplayer portion of the game but the player can buy preset sets of weapons, upgrade the characters body armour and the amount of ammo he can carry. Players need to be careful while shopping though, since the team with the most cash in the end wins.

On the May 27, 2008 edition of X-Play from G4 TV, it was announced that two new maps would be available for download on Thursday, May 29, 2008. It contains a new Co-op map (fighting and eliminating a dangerous Russian militia group based in Kiev's subway system), an expanded Versus map (China Canal Lock), a more dynamic and interactive environment, more destructible objects, and 6 new "secret" achievements. There's also an alternative ending to the game in which the players can take on Dalton in a more dramatic boss battle at SSC's Miami headquarters in which Salem and Rios have to lock him in a vault.

As of August 31, 2009, the Internet Movie Database (IMDB) has Army of Two film listed as in development with a 2011 release year.

In a recent interview with variety EA Games label president, Frank Gibeau, stated that there was a planned sequel to AO2.[5]

Retrieved from "https://armyoftwo.fandom.com/wiki/Army_of_Two?oldid=8995"
Community content is available under CC-BY-SA unless otherwise noted.