Alpha is the primary protagonist of Army of Two: The Devil's Cartel video game and one of the 2 playable characters, the other is his partner Bravo. His name is not revealed, so that the player may "project themselves into the character a bit more."

Alpha is considered the "de facto" leader of the pair since he is often the one who comes up with the ideas and battle plans. He also keeps his hot-headed partner Bravo in check in tough situations and does his best to steer him in the right direction in order to complete the mission.

Alpha is a veteran of multiple armed conflicts with the U.S. Military and Special Forces. He never thought about becoming a mercenary until Rios offered him the opportunity to use his tactical skills "for good."  He still sees himself as more of a soldier or operative than a mercenary. Alpha is a born leader and thinks of T.W.O. as a chance to bring military precision and ruthless efficiency to a paramilitary environment.

In conversations throughout the game with Bravo, he states he has a girlfriend back home, but Bravo is unconvinced and makes jokes about her being fake, such as saying she'll be fine with other inflatable dolls, or that she lived in Canada.

One may infer that he has a soft spot for animals because after they are kidnapped by the cartel, he and Bravo have a conversation about how Alpha was "broken up" because the cartel members waged in dogfights in cages within their headquarters.

Alpha wears Alpha tactical gear, with the Alpha mask. However, the player can opt for him to wear other unlockable gear and masks, or even create their own personalized masks for him.

Alpha wearing his tactical gear
Add a photo to this gallery

Alpha from the cover of The Devil's Cartel 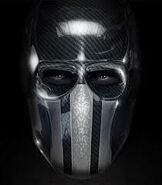 Alpha's previous color scheme during development
Add a photo to this gallery
Retrieved from "https://armyoftwo.fandom.com/wiki/Alpha?oldid=8939"
Community content is available under CC-BY-SA unless otherwise noted.